In December of last year, we asked Juventus fans to choose the new goal celebration song, to be played at the Allianz Stadium every time a home goal is scored. This was the first ever poll to be held on the Socios.com platform.

Thousands of fans from across the world took part in the poll, using $JUV Fan Tokens to cast their vote and choose a replacement for present incumbent Chelsea Dagger.

The results are in and we can reveal that the winner is Song 2 by Blur!

The 1997 hit was unveiled as the fans choice at the Allianz Stadium ahead of today’s Serie A clash with Cagliari (kick-off 15:00 CET) – the club’s first home game of 2020.

IF the Bianconeri score in today’s game, thousands of Juventus fans in the Stadium and millions more around the world will be celebrating to a song chosen on our platform.

We’ve got our fingers crossed for a Juventus goal this afternoon. 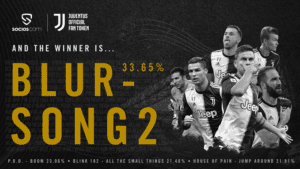 Football clubs have been using social media to carry out polls for years, but after the latest controversy, which saw […]