COPENHAGEN, 03rd March 2020: Chiliz ($CHZ: Binance) today confirms that the first OG poll on fan engagement & rewards app Socios.com is open, meaning fans of the esports giants now have an incredible new way to engage with the team. For this first poll, OG are asking fans to choose which in-game banner will be used by the team’s DOTA 2 Roster this season and in The International.  OG fans are already using $OG Fan Tokens to vote in the poll, becoming the first esports fans in the world to influence their team by using Fan Tokens.

In 2015, the team won the first-ever Dota 2 Valve major, and since then, OG have soared to international prominence, securing another three Valve major titles and becoming the only team to be crowned successive Dota 2 World Champions in both 2018 and 2019.

At the end of last year, OG cemented their position as an esports powerhouse by welcoming an amazing CS:GO roster and also creating OG Seed, to help grow Dota 2 players.

OG Fans, also known as 🌻’s – a nickname popularised through Twitch – are using $OG Fan Tokens on Socios.com to vote in the first poll, choosing between the 4 options shown below:

New DPC Season, new OG! Which in-game banner should our DOTA 2 roster use this season from now on to The International? 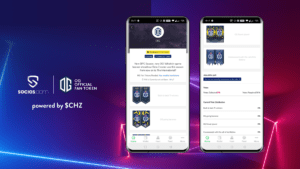 Only those in possession of $OG Fan Tokens are eligible to vote. Fans can purchase $OG Fan Tokens exclusively in the OG Token Offering (FTO™), which is open now on Socios.com. Each $OG Fan Token will be priced at around $1 depending on the exchange rate of Chiliz $CHZ, the digital currency of Socios.com, at the time of purchase.  Once acquired, $OG Fan Tokens cannot be spent and can be used to take part in all future OG votes on the app.

Fans will earn reward points for taking part in OG polls and engaging with the team through Socios.com, giving them the opportunity to access event tickets, VIP meet-ups, exclusive OG merchandise – including signed jerseys –  and other unique experiences linked to OG. Socios.com and OG will reward fans in other exciting ways too, creating once-in-a-lifetime experiences and allowing OG fans to get closer to their heroes.  The more Fan Tokens accumulated and the more a fan interacts with the app, the more reward points they will receive, increasing their chances of winning one of these incredible experiences.

Johan Sundstein, CEO of OG esports said:  “We are honored to work closely with Socios.com so that our fans have the opportunity to participate in building OG’s story. “Socios.com gives fans a voice, so the link with OG was quite natural. Enhancing the connection with our community has always been part of OG’s DNA. With Socios.com, we will be able to take it to the next level. “We want to push the experience further, by offering them the opportunity to have a real impact in some of OG’s decisions.”

Alexandre Dreyfus, CEO & Founder of Socios.com, said: “OG is a team like no other in the world of esports, and their ‘Cinderella’ story has created a strong and loyal bond with their fans. $OG Fan Tokens will strengthen that bond, allowing fans to influence the team and earn some really cool rewards and experiences. “This opening poll gives fans the opportunity to choose an in-game banner that celebrates the team’s incredible success over the past few years. Fans can look forward to seeing the winning choice live in tournaments this season and, most importantly of all, in The International 2020. “All the 🌻’s out there now have an amazing new way to give OG power!

OG is the first esports partner to be launched on the Socios.com platform, joining the likes of FC Barcelona, Juventus, Paris Saint-Germain, AS Roma, Atlético Madrid, Club Atlético Independiente & Galatasaray in launching Fan Tokens for supporters all over the world.

About Chiliz
Chiliz ($CHZ) is a digital currency for sports and entertainment platforms. It fuels the world’s first scalable, tokenized voting platform, Socios.com where fans can buy, trade and execute voting rights in their sports teams. The Chiliz project has raised $66 million from some of the world’s largest cryptocurrency exchanges and leading crypto funds in Asia, including Binance, OK Blockchain Capital, and Ceyuan Ventures. Chiliz is owned by Malta-based Mediarex Group, a global sports and entertainment organisation, which was founded in 2012. In January 2020, Chiliz announced the launch of Chiliz.net, a first-of-its-kind mobile and desktop crypto exchange for sports and entertainment assets.

About Socios.com
Socios.com is powered by the Chiliz token ($CHZ), both an ERC20 utility token on the Ethereum blockchain and BEP-2 token on Binance Chain. Fan Tokens are specific to a team or a club, and are a finite, digital asset that provides access to an encrypted, immutable ledger of voting and membership rights ownership. The tokenized fan-voting platform uses Fan Tokens, which operate on a separate permissioned side chain. The Fan Tokens are limited in number, and are fungible, meaning their ownership can be traded, and their price is driven by the market. The venture was inspired by the fan-led management frameworks or ‘socios’ of some major football clubs. Dubbed ‘Socios 2.0’, the platform simply represents the digitisation of this model of management.

We are glad to announce today the launch of Socios ID, the first blockchain-based ID verification for the sports and […]