Socios.com partner OG, lifted their second consecutive international title yesterday, going down in history as the first esports team to do so. Here Gillian Linscott takes a look at their incredible win.

The Grand Finals of the International 2019 came down to the historic battle between two previous TI winners – OG and Team Liquid. Both teams had pushed their way through the Group Stage and the Main Stage to earn their right to play in the finals. With the Aegis of Champions – the title of the International 2019 winners – and over $15m in prize money for first place, both teams were eager to see their names inscribed on the Aegis once again. So how did these teams get here and who ultimately claimed the title of TI winners for the second time?

Before OG stepped onto the Main Stage in Shanghai, they had just breezed through Group B during the group stage. With the best record from both groups (14-2), and only 2 losses away from a perfect run, OG claimed the top seed position in Group B beating out DPC favourites Vici Gaming, Virtus.pro, and Evil Geniuses.

The Grand Finalists OG and Liquid both had complete runs on the Main Stage but in two very different ways. OG made their way through the upper bracket and Liquid made history by completing a full run of the lower bracket all the way into the Finals. 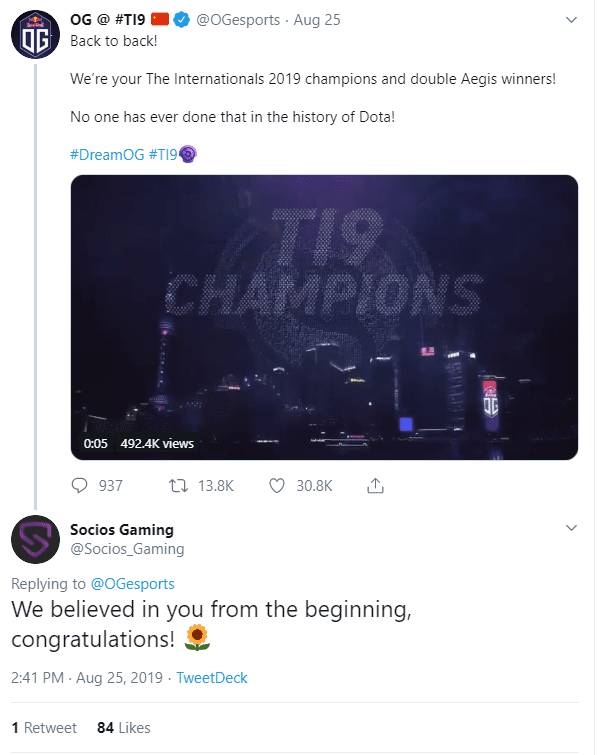 Going into the Grand Final matches, it was clear that there were favourite heroes, like Enchantress and Io,  that were make or break heroes for teams. While both Team Liquid and OG were keenly aware of which heroes were favored, both of their drafts were centered on drafting a line-up that was more aggressive and faster paced than their opponents.

An unrelenting aggression from OG saw Team Liquid falter during their matches, especially during games two and four when OG, despite losing team fights or being down a player, continued to push Liquid to the point where they kept having to react to OG instead of planning out their next moves. Despite a first game loss to Liquid, OG shrugged off the loss and won the next three games back to back, closing out the series 3-1.

OG’s historic repeat win isn’t just a story of a team performing well at TI – it’s the story of how dedication, a positive mental attitude, and a whole lot of meming can help a team achieve the unthinkable. Their winning playstyle, and attitude, is what made this team stand apart from the rest and helped them secure that second Aegis win.

The meteoric rise of esports is unlike anything the world has seen before, catapulted onto the world stage in part […]