Socios.com Blog
- Voting: How does it work?
[addtoany]

With Socios.com, allowing fans to get involved in club decisions is at the heart of what we do. But how does it all work?

What do I need to vote?

Once I own Fan Tokens, how do they work?

All your Fan Tokens are kept in your virtual wallet. They act as your licence to vote in every single poll the club publishes.

When can I start voting?

You can start voting when your club publishes their polls. Juventus’s first poll will begin in early December, while the first polls for our other partner teams – Paris Saint-Germain, West Ham United, AS Roma, OG, Atlético de Madrid & Galatasaray – will begin in Q1 2020.

Who issues the polls?

The polls are issued by the teams.  We use blockchain technology to ensure that the integrity of the vote, meaning no cheating, no meddling with the results and that the outcome is what the majority have voted for.

Can I own more than one Fan Token?

Yes. In fact, the more Fan Tokens you own, the more influence you will have. If for example you own 50 Fan Tokens, your vote counts 50 times.  But remember, each team has placed a limit on the maximum number of voting rights that any single person can have, to ensure that the vote cannot be influenced by one person or group of people.

So how exactly do I vote?

Simply go to the page belonging to your club, choose the poll, and vote! 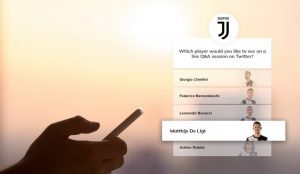 Football clubs have been using social media to carry out polls for years, but after the latest controversy, which saw […]

With Socios.com, getting closer to the club you love has never been easier. Using the latest technology, we’ve created a […]